At the moment, we have 1,193 pages, but make sure to focus on quality over quantity!

This wiki's URL has been migrated to the primary fandom.com domain.Read more here

Thailand is an Asian country that practices Buddhism.

It is a kingdom in Southeast Asia and a parliamentary democracy (similar to the one in the UK). Thailand has never been colonized.

As noted in the Constitution of Thailand, anything that denigrates the Thai monarchy is strictly prohibited. Thailand's lèse-majesté law is known to be one of the harshest in the world for a democracy. Each count of lèse-majesté anywhere in Thailand has the equivalent of a prison sentence of up to 15 years.

The Thai military junta banned the game Tropico 5, as the military government thought it might affect peace and order.

The entire GTA series was banned in 2008 after a fan of GTA IV killed a taxi driver. The ban also affected subsequent releases, such as Chinatown Wars and GTA V, however the Steam release of the latter is still available. 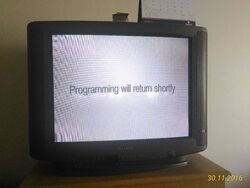 A BBC programme about the Thai monarchy was censored for legal reasons.

Most provocative imagery in anime is censored by blurring.

Any scene depicting someone smoking is censored by blurring or by pixelating.

Nearly any rendition of Anna and the King of Siam and The King and I ever made is banned because the King of Siam, which is culturally seen as divine, is depicted as a flawed human being. No matter how the filmmakers rewrite the story or how the King may be respectfully and positively portrayed, the basic story still implies that Thailand is a backwards country full of people who need a Westerner to civilize them.

This article is a stub. Please help the Censorship Wiki by expanding it.